"The Banquet of Baldassarre" is back to its former glory

We are pleased to announce the completion of the restoration of "Il Convito di Baldassarre" by Giuseppe Tortelli, one of the most prestigious works of the Pinacoteca Tosio Martinengo of Brescia.

This important artistic recovery project has been possible thanks to the commitment of Metal Work, which has always been attentive and sensitive to the enhancement of the culture and traditions of its territory. Because our values go beyond our work.

The Author
Giuseppe Tortelli was born in Chiari (Bs) in 1662. He is considered one of the most interesting painters of Brescia's art in the first half of the eighteenth century and one of the highest interpreters of the Baroque. He received extensive education in literature and philosophy before devoting himself as a self-taught to painting, revealing an innate talent. The interest in the great authors and the desire to perfect himself led him to undertake trips to Rome and Naples where he had the opportunity to study the works of the masters of his time. Later he moved to Venice where he began to work assiduously. During his career he made mainly altarpieces and frescoes for churches in the city and province of Brescia. Among his students the painter Giuseppe Zola is remembered. He died in Brescia in 1738.

The Painting
"Il Convito di Baldassarre" - Oil on canvas - cm. 408 x 790 - Pinacoteca Tosio Martinengo of Brescia. It was born as a pendant together with "The expulsion of Heliodorus", another large canvas created by Tortelli. Mangiante brothers donated the two works to the City of Brescia, in February 1890. In the subject and style there are obvious references to the culture of Sebastiano Ricci, who is generally considered the master of Tortelli. If classicism is found above all in the figurative references and in the general compositional balance, it is however the Venetianism of Ricci and Gregorio Lazzarini that dominates, in the accentuated shadows, in the liquid and transparent drafting, but also in the typologies of the figures and in the resolution of some groups . Figures with anti-classical features, which can derive from Celesti, and faces with clean and regular profiles, according to a rigorous Roman-Bolognese taste coexist in it.

The State of Conservation
The painting remains on the first canvas, anchored to a frame built with fixed joints, reinforced by a central cross and diagonal elements at each corner. The support is made up of four fabric sheets with an orthogonal weave, superimposed, joined with seams, which can also be clearly identified from the front. In the past, some maintenance work was carried out, which became necessary to buffer the lacerations and holes, mainly due to accidental impacts. A few patches are in fact detectable on the back which correspond to now altered pictorial shooting on the front. The aspect that affects the good conservation of the work is represented by a widespread crack, which involves uniformly all backgrounds, and is accompanied by the imperfect adhesion of paint layers to the support canvas. In addition to the pictorial restoration shooting, on the surface there is a thick layer of non-original paint, probably of waxy nature, markedly yellowed. For the aging of materials, original or not, an uneven surface sheen has been created, characterized by dry up areas and other more polished. The low deposits of polluting particles and dust also contribute to the poor legibility of the scene. 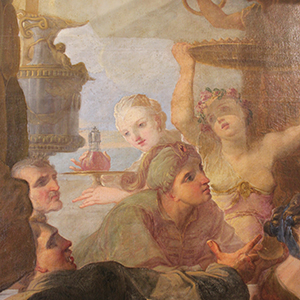 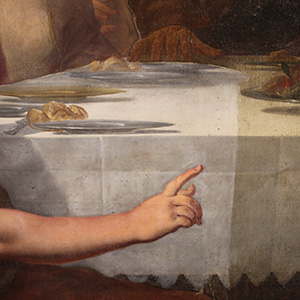 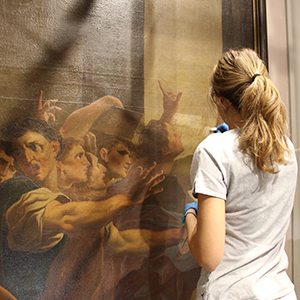 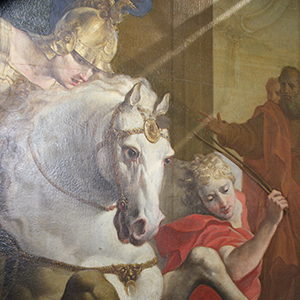 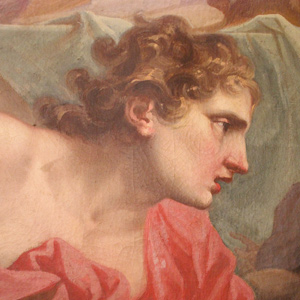 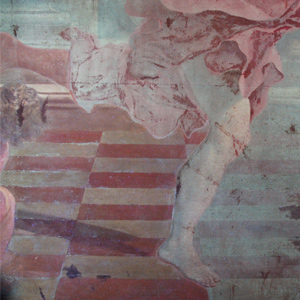 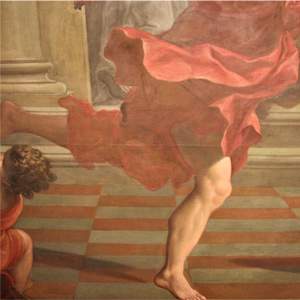 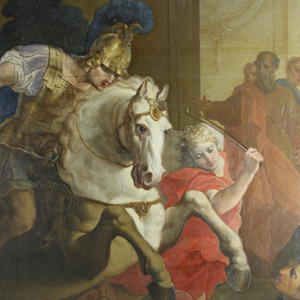 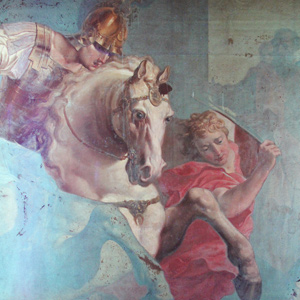 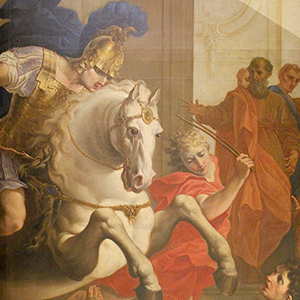 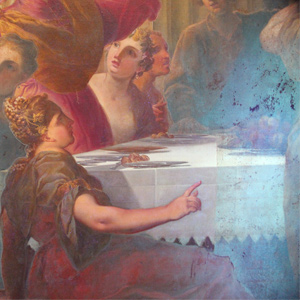 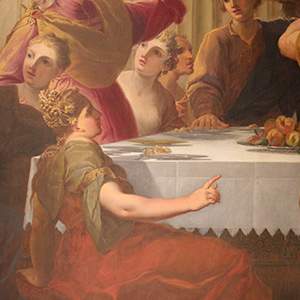 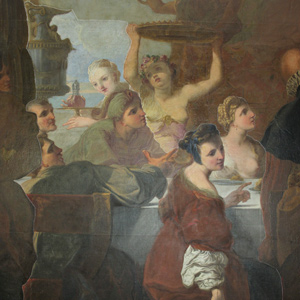 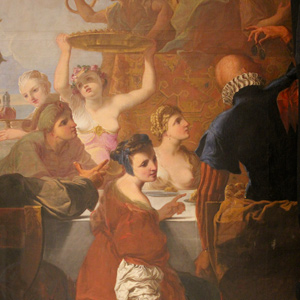 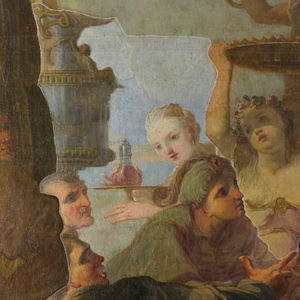 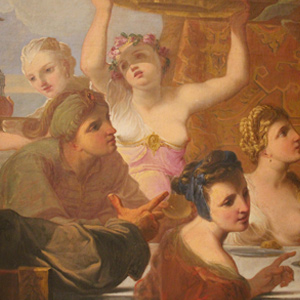 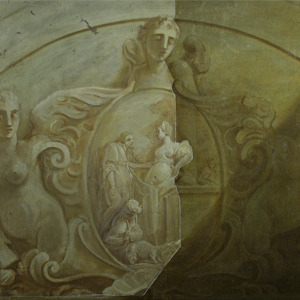